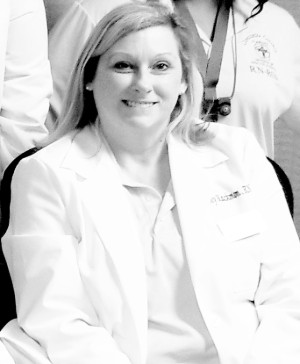 Divine intervention and intestinal fortitude led Tammy Blackmon to a nursing career that turned her life around.

“I had no interest in becoming a nurse,” she said. “It wasn’t in my plans, but it was God’s plan.”

After 27 years in the profession, Blackmon completed the online Master of Science in Nursing – Nursing Administration program at The University of Alabama in Huntsville in August 2019. Although it’s been a long, tough road to achieving this goal, she wouldn’t trade her path to graduation.

“I fell in love with my career, it has been fulfilling and a blessing,” she said. “It’s been a journey, and I wouldn’t take anything for the experience.”

Blackmon, 57, is the informatics coordinator at Vaughan Regional Medical Center in Selma, Alabama. In the midst of all her success, she never forgets the event that led her to become a nurse.

Years ago, she was working in a factory and living in poverty with her now-husband and three children.

“My husband was a logger so his work depended on weather, equipment and the availability of wood,” she explained. “My youngest daughter had just started kindergarten when I got laid off. I was devastated.”

When one of her friends from church, Melanie Gordon, suggested they take an entrance exam for nursing school, Blackmon came up with a laundry list of reasons why she couldn’t do it:

“I wasn’t smart enough to pass. I had been out of high school for 12 years. I couldn’t afford school and needed a job. I had never thought about being a nurse. I didn’t have transportation if I did get into school.”

Blackmon finally gave in and was accepted after finishing with scores in the top 50 out of 90 applicants. While she was happy to be admitted, she still needed money for tuition and transportation to make it work.

“I heard about the local hospital giving scholarships in exchange for employment,” she said. “I spoke with the administrator who said they had given out the last one and he would put my name down for next year. I got a call the next day saying a scholarship was available.

“Then, I received a call from a young woman who lived on the other side of me and said she would be going to school. Since she had a phobia of crossing the Smith Mountain alone, she asked if I would ride to school with her.”

Once Blackmon’s doubts and obstacles vanished, her career began to take off.

Blackmon completed her associate degree at Coosa Valley School of Nursing in 1993. Within four years, she was a nurse manager at Clay County Hospital.

“I worked in almost every department and moved up the leadership ladder as far as I could without furthering my education,” she said. “I’ve been a supervisor, a manager, a director and each position has increased my knowledge and my passion.”

Blackmon and her husband, Bill, have five children — Brandy, Brian, Heather, Robert and Daniel. Once they were grown, she set her sights on returning to college. She graduated with a Bachelor of Science in Nursing from Concordia College in 2018 and immediately enrolled in the MSN in Nursing Administration program at UAH.

“Obtaining my master’s degree is something I wanted to do but never had the opportunity to do before,” she said. “I wasn’t necessarily interested in the administration pathway, but I wanted a master’s degree.”

Blackmon chose UAH because she knew she could progress quickly, and finish in as little as 10 months. The flexibility of the 100% online format also allowed her to earn a graduate degree while working full time.

“Traveling to school is not an option for me,” she said. “The online format worked out perfectly for me.”

Her two favorite courses in the online MSN in Nursing Administration curriculum were NUR 631: Leadership in Human Resource Management and NUR 638: Informatics for Nurse Administrators.

“With the leadership course, I got to interview and find out interesting facts about leaders I’ve worked with for several years,” Blackmon said. “I enjoyed the informatics course because I took the position as informatics coordinator at my hospital nine months ago and wanted to learn more about it.

“I’m working in a different area than I was when I started the program, but I’ve obtained some knowledge that has been and will be useful in any job I pursue.”

Earning a master’s degree puts an exclamation point on the remarkable career Blackmon has built from scratch, enhancing all of the leadership experience she has gained.

“I’m proud to obtain this degree from The University of Alabama in Huntsville,” Blackmon said. “I’ve only visited the campus once, but I hope to be part of the alumni association. I am not opposed to pursuing a postgraduate degree. It’s my husband who needs convincing.”

Although she will have to wait until December 2019 to walk in the commencement ceremony, she plans to be there. “My children are proud of me,” she said, adding that she will celebrate with her entire family, which also includes nine grandchildren.

“I have waited a long time for this,” Blackmon said. She also plans to enjoy some camping with Bill after she crosses the stage and receives her diploma.

“My ultimate career goal is to retire from going to the hospital every day, and teach online from the back of my RV while traveling,” she said.

No matter what the future holds, Blackmon is happy with the way her life has turned out. The Bible verse Jeremiah 29:11 reminds her of where she’s been, and continues to light her path forward:

“‘For I know the plans I have for you,’ declares the Lord. ‘Plans to prosper you and not harm you, plans to give you hope and a future.'”

Have a question or concern about this article? Please contact us.

Articles that appear on this website are for information purposes only. The nature of the information in all of the articles is intended to provide accurate and authoritative information in regard to the subject matter covered.

The information contained within this site has been sourced and presented with reasonable care. If there are errors, please contact us by completing the form below.

Timeliness: Note that most articles published on this website remain on the website indefinitely. Only those articles that have been published within the most recent months may be considered timely. We do not remove articles regardless of the date of publication, as many, but not all, of our earlier articles may still have important relevance to some of our visitors. Use appropriate caution in acting on the information of any article.

Transformational Leadership in Nursing
What leadership qualities do you most admire and appreciate? Chances are, you see a good leader as someone who initiates change, creates a vision, inspires,…
Read more
Donna DeSantis Advances Career While Earning MSN Online
After receiving a promotion to a management position, Donna DeSantis wanted to have the education to back up her experience. So, she enrolled in the…
Read more
Antris Scales Is Set to Do More After Earning MSN Online
Antris Scales never doubted that she would become a nurse. The daughter of a nurse, Scales discovered early in life that she loved taking care…
Read more
Changes in Hospital Leadership
Women make up about half of the U.S. population. But they far outnumber men in the nursing workforce. Women account for nearly 90% of all…
Read more
Gain Confidence in HR as a Nurse Leader
Nurses have one thing on their minds when they graduate: passing the NCLEX-RN exam. Nurse leadership roles may not even be a thought yet. But…
Read more
What Nurse Leaders Need to Know About Informatics
Nurses are being called on to lead efforts to achieve the “triple aim” in healthcare: better patient outcomes, improved population health and reduced costs. Nurses…
Read more
Why Choose an MSN in Nursing Administration
Are you a nurse with a passion for leadership? Do you want to become involved in managing a team of nurses? Nurse administrators work with…
Read more
Leadership Skills All Nurse Administrators Need
Nurse administrators have education and experience in both patient care and business administration. Rather than working at the bedside with patients, nurse administrators take a…
Read more
How Long Does It Take To Earn an MSN?
Completing a Master of Science in Nursing (MSN) in Nursing Administration degree program is easier now than in the past. Why? Because you no longer…
Read more
RNs Agree: More Nurse Leadership Needed
As Baby Boomers move into retirement — there are more people having health problems and fewer nurses to treat them — the nursing shortage seems…
Read more
What Does It Take to Be a Great Nurse Administrator?
Nurses, by nature, are committed to providing great bedside care. When led by a dedicated and competent nurse administrator, healthcare teams can provide exceptional care.…
Read more
Why Earn an MSN in Nursing Administration Online?
After spending time working at the bedside or in a clinic, most nurses have a lot of great ideas about changes that could make practice…
Read more

Submit this form, and an Enrollment Specialist will contact you to answer your questions.

for help with any questions you may have.