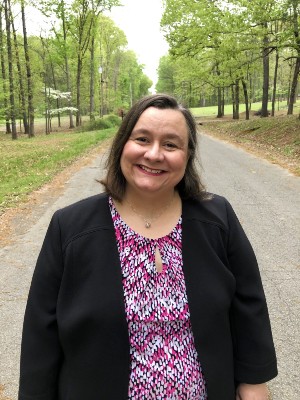 After earning bachelor’s degrees in business and education, she enrolled in the online Registered Nurse to Bachelor of Science in Nursing program at The University of Alabama in Huntsville, and she’s on track to graduate in August 2020.

“I was scared to death because nursing school almost killed me,” she said. “I had never done anything that hard in my life. I had two degrees and thought, ‘I can do this. This is nothing.’ But that two-year associate degree was pretty tough. So, I put off going back for a couple of years.”

Garner, who graduated with an associate degree from Calhoun Community College in 2017, is now a charge nurse at Valley View Health and Rehab in Madison, Alabama. She hopes to become a family nurse practitioner.

“To get there, I had to have a bachelor’s degree,” she said. “If that two-year nursing degree didn’t kill me, I can do anything.’

“My dad was on hospice care at the time. I wasn’t working as much because I was taking care of him. He was sleeping a lot of the time. So, I thought, ‘While we’re sitting here doing nothing, I could be doing these online classes.’ That was one reason I went ahead and signed up.”

Since Garner returned to work full time in January 2020, she hasn’t missed a beat. The online format helps her balance her job, school and still have time for a family life with her husband, Thomas, and their sons, Austin (20) and Matthew (14).

“The program is awesome,” she said. “It’s very manageable. I do schoolwork on my days off. It usually takes me one day a week to complete the assignments. There’s a lot of flexibility with the online format.”

Garner grew up in Decatur, Alabama. She earned a bachelor’s degree in business administration from Athens State University and launched her first career.

She also got married and started a family while in school, which prompted her first career change. She earned a second bachelor’s degree in early childhood and elementary education from Athens State.

“I needed to do something more geared around my family, so I went into education and loved it,” she said. “I taught for eight years in Morgan County Schools.

“My oldest kid was having some difficulty in school, so we decided to homeschool our sons. I had to leave my teaching job, and I stayed home for seven years total.”

But Garner returned to college and the workforce after her husband was laid off from his job as a contractor.

“I already had two degrees, but I didn’t know what I could do with them because they were for mostly daytime jobs,” she said. “I needed a job with weird hours.

“I did some research and saw that nurses make pretty good money. My dad was sick at the time. I watched the nurses at the hospital and thought, ‘I can do this.'”

Once Garner was ready to go back to school, she narrowed her choices to the University of Alabama and UAH. Although she first enrolled in the Bama program, she ultimately went with UAH for her online RN to BSN.

RN to BSN to ROI

Garner is already reaping the benefits of earning a bachelor’s degree in nursing by laying a foundation for the next phase of her practice. She hopes to remain in long-term care and rehab.

“I was expecting the program to be more about health and the body systems,” she said. “But it seems to be more about leadership, which I have enjoyed. In fact, I have applied for a leadership position I will probably end up taking at my work. I feel qualified to do that now.”

The information Garner is learning in the program is also applicable to her current role.

“There are a lot of projects we’ve had to do that involve me having to talk to management at work,” she said. “I have applied several things. Sometimes you have to use scenarios from your work to create projects.”

With the support of family and friends, Garner looks forward to keeping her education going on to the graduate-degree level.

“They’re very excited for me,” she said. “When I went to nursing school, my husband thought I was crazy. I stepped way out of my comfort zone by doing that. This program has given me the confidence to move forward.”

Especially now that Garner is close to graduation day, she is proud that she faced her fears. When it comes to earning a degree online, she believes there is no time like the present.

“Don’t wait,” she said. “Don’t be afraid of this degree. I was scared to death after that two-year RN program. This is not as daunting as that was. That two-year program consumed my whole life. This is not like that. It’s very manageable and very doable.”

Learn more about the UAH online RN to BSN program.

What Is Community Health Nursing?
Community health nursing is a rapidly growing nursing subspecialty that aims to improve the health and well-being of individuals in a certain geographic area. Given…
Read more
Becoming a Flight Nurse
When the time it takes to transport critically ill or injured patients to a medical facility can mean the difference between life and death, they…
Read more
Advance Your Career by Joining Nursing Associations
Nurses can improve their job prospects and increase their salary potential by earning a Bachelor of Science in Nursing (BSN). Another way nurses can boost…
Read more
Carrie Simmons Returns For Online RN to BSN Program
Although Carrie Simmons nearly completed a bachelor’s degree in aerospace, she changed her trajectory and returned to the frontier that she loves — nursing. “I…
Read more
Jessica Spangler Thrives in UAH Online RN to BSN Program
Jessica Spangler was drawn to the Registered Nurse to Bachelor of Science in Nursing online program at The University of Alabama in Huntsville (UAH) while…
Read more
5 Tips for Self-Care for Nurses
Once nurses pass the NCLEX and become registered nurses, they are ready to provide patient care. But they may not be aware of the effects…
Read more
10 Nursing Apps You Can't Live Without
A review of top-recommended computer and mobile apps for nurses led to this shortlist that can help you in your busy life. Nursing Central Nursing…
Read more
Affordable Online RN to BSN Program in Alabama
Updated On: May 18, 2021 When people are thinking about returning to school — whether they’ve only been out a few years or are looking…
Read more
Sample Questions to Practice for your Nursing Job Interview
You are a registered nurse (RN) about to graduate from a Bachelor of Science in Nursing (BSN) degree program, and now you are ready for…
Read more
What Nurses Need to Know About Workplace Violence
Nurses must stay alert to the possibility of violence in the workplace. A Bachelor of Science in Nursing (BSN) degree program prepares nurses for this…
Read more
How to Build a Nursing Portfolio
Students in a Bachelor of Science in Nursing (BSN) degree program may be familiar with the term nursing portfolio. Both new and experienced nurses should…
Read more
How Can Nurses Help in a Disaster?
For more than 500 years, the word “nurse” has meant “person who takes care of the sick.” By their very nature, people who care for…
Read more
Have a question or concern about this article? Please contact us.

Articles that appear on this website are for information purposes only. The nature of the information in all of the articles is intended to provide accurate and authoritative information in regard to the subject matter covered.

The information contained within this site has been sourced and presented with reasonable care. If there are errors, please contact us by completing the form below.

Timeliness: Note that most articles published on this website remain on the website indefinitely. Only those articles that have been published within the most recent months may be considered timely. We do not remove articles regardless of the date of publication, as many, but not all, of our earlier articles may still have important relevance to some of our visitors. Use appropriate caution in acting on the information of any article.

Submit this form, and an Enrollment Specialist will contact you to answer your questions.

Ready to get started?

for help with any questions you may have.